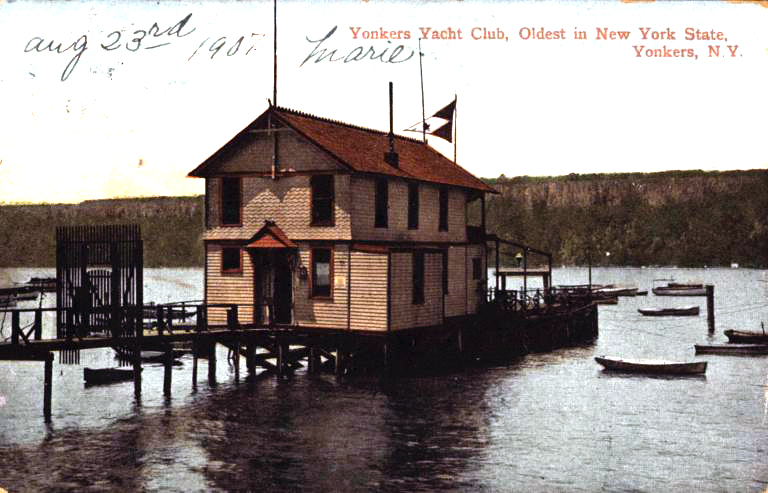 The Yonkers Yacht Club was founded in 1879. Originally located on Fair Street in Yonkers, the club moved in 1941 to its present location at 1203 Warburton Avenue. The postcard above is a photo of the club in its original location. Our annual regattas were once regularly featured in articles in the New York Times like the one below:

The ninth annual regatta of the Yonkers Yacht Club was sailed on the Hudson River yesterday, and proved one of the prettiest nautical sights ever witnessed on that river.

That race included 37 yachts from the Sing Sing, Columbia and Brooklyn Yacht Clubs. In August 1880, an earlier article in the New York Times titled  told the story of a 12 mile race from the club to Dobbs Ferry and back.

The Yonkers Yacht Club had what they termed a “ladies’ race” yesterday afternoon on the Hudson off Yonkers. The race was so called because a lady was carried aboard each yacht, and was designated, for the time being, its Captain. Each yacht flew at its peak the club pennant, and in addition several displayed various burgees and flags. The Rambler yacht won the race and the lady captain was presented with a gold locket necklace.

We’re proud of our history at the Yonkers Yacht Club.

The club sponsors events every year like circumnavigations of Manhattan Island and trips north through the New York State Canals.

We are a proud member of the Hudson River Boat & Yacht Club Association.